The concept of the “Rite of Passage” is seen in all cultures. It’s a universal mark indicative of transitioning from adolescence to adulthood in order to be accepted in a social group. From Aborigines in Australia to New York, rite of passage is used to separate the men from the boys. Today we dig deep into some of the most horrific rites of passage in modern times and compare them to a range of rites in the US. None of them seem to rival “Hunger Games”, but they definitely are unique.
Prev3 of 9Next 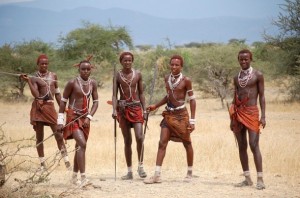 East Africa’s Maasai tribe is notorious for its rite of passage. The ritual involves hunting a lion using only spears. Traditionally, this was a one boy show. The amount of lions available had started to dwindle, so they changed the rules.  Hunting is now done by boys all similar in age. Killing injured lions are deal-breakers; the boys have to track a healthy, fully-grown lion for days and confront it using spears. This sounds like a modern day Braveheart with ferocious lions instead. I wouldn’t suggest trying to mimic this at your local zoo with your plastic Spartan spear you used for your Halloween costume.

Image Source Most women are not keen on admitting their own intention in the open. If she’s with her friends,...