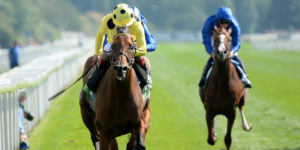 Despite a perhaps surprise entry from Order of St George, Postponed remains the favourite in the horse racing odds among bookmakers to claim victory in the upcoming Qatar Prix de l’Arc de Triomphe, commonly known as the most illustrious race in the sports calendar. Aidan O’Brien’s Order of St George still has the option to run in November’s Melbourne Cup, having been entered into quarantine for Australia in order to keep his options open. However, the statement from co-owner Lloyd Williams that the Arc is the preferred destination means that the four-year-old is likely to come into contention in the odds for the race.

Despite struggling last time around, ending an unbeaten run that spanned six outings, with Wicklow Brave eventually winning the Irish St Leger, Order of St George enters the horse racing odds at bookmakers Coral at 20/1 to recover in style at Chantilly. The recent Ascot Gold Cup winner is one of three options for champion trainer O’Brien, with Highland Reel and Sir Isaac Newton left in the running, although the Irishman has withdrawn Idaho and Bondi Beach. However, with question marks surrounding if they have the legs for the big meeting in France, Order of St George looks like the leading candidate with just a matter of weeks remaining until the race.

However, trainer Roger Varian has been talking up the chances of favourite Postponed in recent days, with the belief among those within the industry that the Irish thoroughbred has both the speed and stamina required to overcome the difficulties at Chantilly. The five-year-old has won the Dubai City of Gold, Dubai Sheema Classic, Coronation Cup and the International Stakes already in 2016, and is unsurprisingly the overwhelming favourite in the horse racing odds with Coral, at just 3/1.

Order of St George is also the current favourite for the QIPCO Long Distance Cup at Ascot, although such a run would certainly depend on participation in the Arc. Should O’Brien’s prized asset miss out on events in Chantilly, Order of St George could well come up against stablemate Bondi Beach once again. With Order of St George having been the favourite for the Melbourne Cup, Michael Bell’s Big Orange now takes over the mantle, with Coral offering the five-year-old horse racing odds of 14/1 to come out on top at Flemington.

Why Joining Intramural Leagues in College is Essential

Whether you’re into watching or playing, there’s much to be said about sporting events and the thrill they bring. Why...