Absinthe. The name alone already connotes a lot of baggage. Made by a French doctor in the late 1700’s, it was originally intended for medicinal purposes. This MD was banned in Switzerland, which probably made the debate around the matter that much more questionable. Made from lemon balm, mint, fennel, hyssop and wormwood (a supposed hallucinogen), plus the 110 – 144 amounts of high-proof spirit, Absinthe had a fighting battle throughout its entire course in history, even up to this very day.

Before Absinthe was banned, it was rather enjoyed by many folk around the world, mostly in France. Otherwise known as “Green Muse” by Parisians, Absinthe posters hung on the walls of many establishments. For anyone who visited New York around the year 2000 or so, these posters were as common as, well, the common cold. Almost everybody who was anybody had at least one hanging in their flat. And how can you blame them? One look and you’ll be just as hooked on the gorgeous artistry, as you will be with the half naked women that adorn many of them. Here are 25 posters to ponder, made during the time that this lovely green drink was still quite taboo. 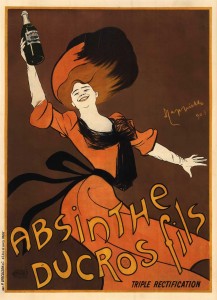 This one pretty much says it all. Drink a bottle of this and you will have a smile plastered on your face for so long it’ll remind you of the time your mom used to say – that it would get stuck like that. Yup, just like that.