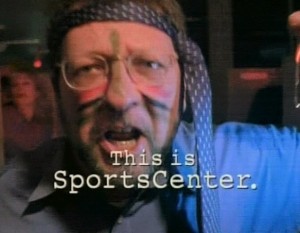 Summer months mean women in bikinis, sandy beaches, beer cans stacked to the ceiling, and baseball!  ESPN’s Sportscenter has done a lot to transform how we look at sports, especially their ridiculous catch phrases.   Check out some of our favorite SportsCenter baseball catch phrases below:

What are your favorite baseball catch phrases?  Are there any awesome ones that we missed?  Let us know in the comments below!