The guys serving their time in jail don’t get to enjoy many of life’s luxuries. But then again, why should they? They’re in jail paying for a crime that they may or may have not committed. Whatever the case may be, this is detention that’s been amped up exponentially. They don’t have access to chopping boards, steak knives, or lighters – everyday needs that we don’t really think about. Their amenities are limited, and for good reason too. These men have learned the fine art of concocting crystal meth without the use of high-end test tubes and gaskets.

Necessity is indeed the mother of all invention. They had to make do with what was within their easy grasp. Just imagine what these guys can come up with if they had everything at their disposal. They could very well be the next Einstein, but since they have a track record, the world has suppressed their talent. Despite the limitations they’ve faced, give them something and they’ll suddenly turn into your modern day MacGyver. This makes you think that you would want to be stuck with them if you were stranded on a desert island. Hmmm…come to think about it, maybe not if you value your life.

This is certainly far from the rubber lover you’re used to seeing. Your friends have the beautiful blow-up doll hidden under their beds. Prisoners, on the other hand, might just be sent to solitary confinement should the warden see this one in their room.  Just imagine the torso of a woman with this simple piece of equipment. It kinda looks like someone’s ass. This might just explain where the anal sex stereotype came from. Still, it’s not as pathetic as the person outside the 4 walls of prison with the actual sex toy. Just makes you wonder why he couldn’t land himself a real girl.

Gambling is definitely not your get-out-of-jail-for-free card. This isn’t Monopoly. Besides, gambling is highly discouraged, especially when you’re trying to prove that you’re a reformed man. If you want to get out earlier than scheduled on good behavior, then hide these. But then again, it can get pretty boring when all you have to do is stare at the same faces day in and day out. Sneak in and play hooky to pass the time away. If you want a foolproof set of dice, make them edible. Just put them in your mouth and chew the moment the stiff in uniform walks past you. 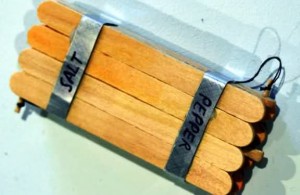 Hey, these guys do need to enjoy their food. If they can’t get a girl, then their meals should at least be decent. Prison food is certainly no Four Seasons buffet, but at least a dash of a few spices can make it easier to imagine. But stealing the salt & pepper shakers from the cafeteria is frowned upon. What about that treat hidden under the bed? No problem! This makeshift shaker saves the day…or night! Whatever time they can sneak the food in.

It’s certainly not to spark up a doobie, else the smell will stick on the walls. But then again, they can’t arrest you for drugs right? You are, after all, already in jail! But if you want to stick to the Marlboros, you obviously still need a lighter. Pyromaniacs run amok the prison halls as well, which is why lighters are banned. Still, this hasn’t stopped those walking chimneys from enjoying nicotine air. Just look at how this lighter works and you’ll wonder if these men were ever related to the great Alexander Graham Bell himself.

Nothing says “jailbird” louder than a tattoo marked across your chest. While prison may not be as glamorous as Elvis’ Jailhouse Rock video, you can definitely be the true rock star that you should be while serving time behind those steel bars. Get a tattoo. How? This isn’t the tattoo gun the guys from Miami Ink use, but it’s certainly just as effective.

Can’t light a joint? Easy! Any tube will suffice. As soon as you’ve gone through a whole tube of toothpaste, prick a few holes on the end and smoke through it. You’ll get minty-high within minutes. Plus, the guards won’t suspect a thing because your breath smells amazing! It’s smart, practical, and sneaky. If you have the German horseradish tube just like the one in the picture, it works as well! The guards won’t suspect a thing because it’ll look like the usual garbage they see when you throw it into the bin. Stoners don’t have to stop doing what they love most as long as they can do this. You’re only worry right now is where to get your next supply of cannabis.

Anything that has to do with fire and open flames are definitely not allowed in prison for obvious reasons. This could be used to burn someone’s face off. But just because candles aren’t allowed in jail doesn’t mean you can’t find any in there. As long as these guys have empty plastic containers and a piece of long string, you can bet that these crude candles are stashed somewhere. Whether it’s to light their way out of an empty tunnel or to sterilize those needles, these things will always have some use.

Who would’ve ever thought that chocolate could actually be used as a prison weapon? If the guy in front of you pisses you off, melt some chocolate coated caramel bars and throw that molten mess into the face of the man who’s annoyed you. Not only is this scorching hot, but the caramel is also difficult to scrape off once it hardens. So the next time you decide to visit a friend behind bars, don’t even think about giving him chocolate to make him feel better. He might just burn your face if you rub him the wrong way.

Because state-issued heaters were never enough to boil water, some genius decided to attach a piece of metal onto a generic plug. Drop the metal on the cup and voila! You now have steaming hot coffee at your disposal. Just be careful, though, and make sure the device is unplugged when you put that mug into your mouth. Otherwise, you might have just given yourself a death sentence if you’re stupid enough to forget the necessary steps.

Don’t even attempt to give yourself a makeover with this razor comb. You just might end up shaving off a few brain cells and giving yourself a lobotomy in the process. If you look closely, you’ll see blades attached and held together by copper wire and shoelace. This gadget is more for murder than aesthetic purposes, and it does its job effectively. In the absence of an actual weapon, this will suffice. Just goes to show you that you should never piss someone off if you’re serving time.

This isn’t for grating cheese, but it can flavor your spaghetti just as well. This is the prison equivalent of brass knuckles. It’ll break your jaw and leave you howling in pain should someone decide to hit your face using this. But hey, prison is all about survival of the fittest. Welcome to the world where the badass dudes win every single time. If you hope to sing your way to freedom, think again. Better arm yourself with more than just a song this time.

It looks like your everyday 38 special, but you’ll see that this one doesn’t spew out bullets. It’s a decoy meant to scare those with poor eyesight. Those breaking out of prison find this to be mighty useful, and while it may be fake, it’ll make them feel like Al Capone even just for a day. The next time a runaway points a dull object on your head and you don’t hear that dreaded click, chances are, it’s a fake. But why take your chances when you’re not entirely too sure what you’re up against?

They say that you reap what you sow.  You’ve planted your fermentable fruits and now they’ve fully grown. Attach this wire to a socket and you’ll have your moonshine soon enough. If these prisoners can’t get their hands on a genuine bottle of Johnnie Black, then they might as well get the next best thing. The drink is hideous, but it does the job in numbing the pain, which is good enough for most of them. As long as you give them anything that ferments, they can turn their jail cell into the next bar that serves potent alcohol.

Those trying to stay away from trouble can play chess. But how do you get an actual chess board in? Not to worry. Ask your artisan inmate to craft a pretty decent replica for you. Print some squares into a box and hold your very own chess tournament. The same rules apply and the only difference is that the chess pieces don’t make a loud thud when you set them down. Look closer and you’ll see how Michelangelo’s lost descendant created the pawns using paper mache.

While incarcerated, a German inmate managed to design his roughly made hotplate that does the job perfectly. What he used? All that he apparently needed were a broken heater, an aluminum foil, and some wires. However, some overzealous prison guard might see this and confiscate it if you decide to bring it to your cell.

There you go, a list of all the wonderful things made in prison. These items won’t obviously make the cover of Wired magazine or Architectural Digest, but hey, you gotta give these guys credit. They’ve given a whole new meaning to the word ingenuity. Who would’ve thought that what we consider garbage is actually an invaluable item behind bars? A bad boy with a talent! We hear some swooning girls right now.