Nowadays, you’d have to drive to a bar to enjoy a good party. Girls would dress up, wait in line, and hope that the bouncer would notice them and let them in. Only the cool ones were privy to the bar’s early entry. As for the rest of us? We had to stand around the block and wait.

Is that how you want to party? Only the coolest of the cool would know what having fun means. Tailgate parties had been around since time immemorial. If you don’t know what this is, suffice to say that you’re missing out on half your life. A tailgate party is a big social event held outdoors. People would gather around the open tailgate of a vehicle, drink, smoke some pot, and get the groove on. These often happened before a big concert or game. There was no need to worry about food and libations. Cars brought grillers and coolers for everyone to enjoy.

Tailgating parties weren’t just cheap – they were classic. While some people still do enjoy tailgating every now and then, cops had to put a stop to many of these gatherings. The guests often had one too many drinks while the stoners were far too spaced out to know what was happening. Belligerent drunkards were often taken to jail while the rest of the gang had no choice but to pack up.

If only we could turn back the hands of time. Tailgate parties years back were so much fun. It’s time that we look back at how it was then. Maybe we could bring back the bygone era of the young and the reckless.

It brought back the fans of Heavy Metal Parking Lot 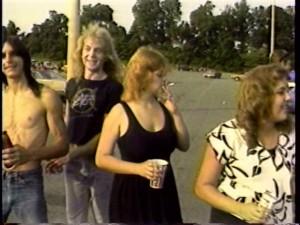 No one parties like the heavy metal music fans. In fact, a documentary was dedicated to this group of folks. Heavy Metal Parking Lot featured fans of Judas Priest and Dokken. This was the mecca of tailgating. The head bangers were there to consume tons of alcohol and marijuana. The parking lot was often filled with shirtless men who did nothing but drop the F bomb in every sentence they’d make. While it may sound crass, it was pure joy to those who attended. The women with feathered hair clung on to their tattooed mates while waiting for their favorite band to finally take the stage. This cult classic was the reality for many. In fact, this is believed to be the DVD of choice for those in the Nirvana tour bus.