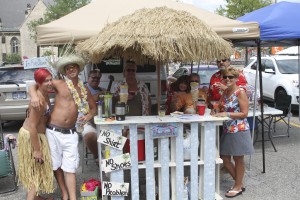 Music fans, particularly the followers of Jimmy Buffet, loved to party. They were the tailgate party leaders back then. Nowadays, fans of the Dave Matthews Band try to uphold tradition. However, Jimmy Buffet fans were just a cut above the rest. They liked to call themselves Parrottheads, and for good reason too. These people were often dressed in colorful Hawaiian outfits that made them look like a… well, parrot. The men were in board shorts while the women donned a grass skirt and a coconut bra. These may look strange to you, but you’ll be amazed at how they managed to replicate the beach atmosphere anywhere. However, this was one party that the cops often ended early. True to the nature of a music fan, the Parrottheads didn’t know when to stop drinking margarita and smoking ganja. Many ended up falling asleep on the grass instead of attending the concert. At least they had the front row view of the concert in their dreams.