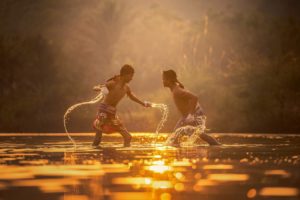 If you ask a thespian or playwright what the most important part of a story is they’d say a round main character. That means a person with many layers and depth that you want to wade through. Antiheroes fit the round character bill perfectly.

An antihero is a central figure that lacks heroic qualities. Typically, the protagonist is an undecidedly good guy, but every now and then cinema gives us a great antihero who has plenty of faults. It’s time to fire up the streaming device or find DIRECTV packages with all of the big movie channels to root on the best antiheroes of all time.

Wade Wilson, a.k.a. Deadpool, is the antihero of antiheroes. So much so, he repeatedly reminds his audience that he’s not a hero and doesn’t want to be one. He also has a fallen from grace past that’s artfully alluded to without going into too much detail. It makes you wonder when Deadpool feel off the hero bandwagon and why. What happened in Jacksonville?

His merciless wit and the joy with which he dispatches of his foes are far from the style of traditional heroes. But then again, Deadpool can only work with what he knows best – being a mercenary.

The Bride in Kill Bill

When you’re routing for a ruthless hired killer to whack people you know you’re witnessing an antihero in the making. But of course, in Quinton Tarantino’s Kill Bill The Bride is after other hit men so that helps. It also helps that we sympathize with her right off the bat after learning she was double-crossed and taken out while pregnant. Only they didn’t take her out and now she’s after much deserved revenge. However, once she learns her daughter is still alive The Bride’s mission becomes getting her back, which makes us more invested in her success.

Leon Montana in The Professionals

Another hired hit man turned parent is the central figure in The Professionals. After a young neighbor’s entire family is ruthlessly murdered Leon takes her in to protect her. He’s surprisingly caring and gentle with the girl despite his violent profession. The character proves that there’s a difference between killers and psychopaths.

Gambling movies are ripe for antiheroes, but Matt Damon’s portrayal of Mike McDermott isn’t the usual fast-talking slickster. He’s actually a reformed gambler who lost everything in the past, and puts it all on the line again for a friend. While he motives are admirable, Mike lets himself get pulled deeper into the underground world of gambling and begins to sacrifice the new life he’s created. As the movie progresses we watch Mike struggle with having a talent that gets him into trouble.

Jackson Healy and Holland March in The Nice Guys

The name of this movie says it all. Two far from perfect guys have to team up to unravel a mystery and protect a girl that’s being followed by hit men. Both of the two lead characters are shining examples of antiheroes. Jackson Healy, a thug for hire that wants to do more with his life, is the classic man-with-a-dark-past antihero. Holland March, a dad with a drinking problem, is a loveable buffoon that somehow always stumbles upon a solution.

These two characters are great because they are so flawed yet own every bit of it. They know their weaknesses and try to work around them, although it doesn’t always work. In the end, you’ll find yourself praying that they both make it to the end of the movie before catching a stray bullet.

Talk about a reluctant hero. David Dunn has super human capabilities but doesn’t want to use them out of fear of losing his family. Ironically, as his young son learns more about David’s past their bond is tested because David fails to live up to his super hero potential.

Scarlett O’Hara in Gone With the Wind

That’s right. Scarlett O’Hara is on the list because she’s a true representation of grit. Her will to survive and protect the few people she cares about redeems her selfish tendencies. Even though Scarlett is the central figure of the story, it’s Melanie who embodies the characteristics of a classic hero. The comparison amplifies the fact that Scarlett is an antihero. But gun slinging, heart breaking, business owning Scarlett is much more fun to watch.

No list of antiheroes is complete without mentioning Dirty Harry. The movie’s title character helped make the cop that walks a little out of line a staple in American cinema. In true Clint Eastwood form, Harry Callahan is a good guy with questionable mortality. It’s just the right mix for an antihero.

More in Business, Did You Know?

5 Simple Ways to Engage Your Readers

Here’s a hard fact: the internet audience is impatient. They can afford to be – they have only too many...