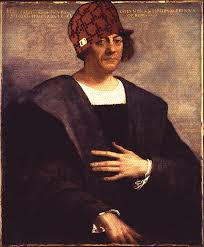 Forget everything you’ve ever read in the text books about Christopher Columbus.

This guy was a world-class asshole, a fact that even his own people would attest to at the time. Here are 10 facts to prove just how much of a jerk this American hero actually was.

1. His brutal governorship over Hispaniola.

Columbus was not the strong, generous leader he has been advertised as in history text books. While ruling over the island of Hispaniola, natives who didn’t collect enough gold for their Spanish leaders would have their hands cut off. Any Spanish colonists who attempted to rebel from Columbus’s rule were executed by hanging. His rule was so brutal, in fact, that Spain commissioned a royal dispatch to travel the ocean blue, just to arrest Columbus for his atrocities and lug him back home.

It is a common misconception that Columbus took to the Atlantic to prove to the world that the world was round. In fact, by the late-15h century, scholars widely agreed that the Earth was globe shaped. Columbus set out to the riches of the New World for money and power.

3. He wrongly identified an entire society, and the name stuck.

When Columbus set foot in the Bahamas in 1492, he believed he had arrived in India. Assuming that there was no way that he, the almighty Christopher Columbus, could be wrong, he quickly labeled the island natives as ‘Indians.” The name stuck, and is still commonly used over 500 years later.

By the time Columbus set foot in the Americans, there was an indigenous population of 50-100 million natives. It goes without saying, you can’t discover something that has already been civilized for millions of years.

It is widely believed that Columbus and his team nearly wiped out the entire population of natives. In Cuba alone, 500,000 natives were killed. 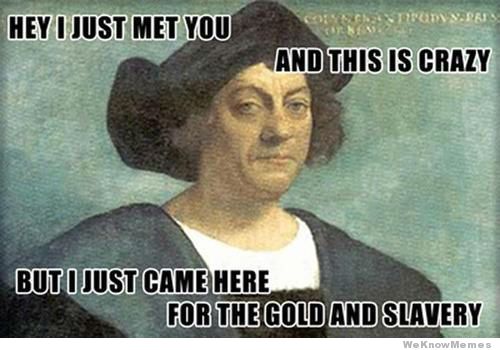 6. He offered native women to his men as sex slaves.

In 1500, Columbus wrote: “A hundred castellanoes are as easily obtained for a woman as for a farm, and it is very general and there are plenty of dealers who go about looking for girls; those from nine to ten are now in demand.” Columbus sold native woman to his men for the purpose of sexual slavery. Some of the girls were as young as nine-years-old.

Not only were natives often hunted for sport, but there were butchers in the Caribbean who specialized in the sale of human meat as dog food. Live babies were sometimes fed to dogs in front of their horrified parents.

8. Columbus and his men spread Syphilis across the globe.

When Columbus’s ships landed in the New World, the natives had never had the chance to build up an immunity to any of the European diseases. As a result, millions of natives were wiped out from diseases that originated on the other side of the globe.

We all know that there is just no way that the Spanish explorers could have actually, ya know, done at least SOME of the work themselves. Columbus helped establish the trade route between Europe, Africa and the Caribbean. The rest is history.

10. Even his own people hated him.

Columbus was known to abuse his family and everyone else around him. His own people turned him in to the Spanish government for his atrocities. Columbus was sentenced to 10 years in prison, but was later pardoned by King Ferdinand.