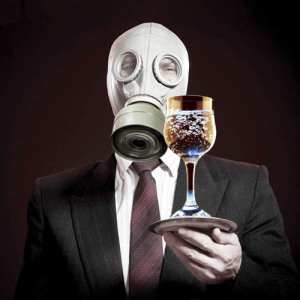 Not all cocktail names are created equal. In fact, the spectrum of mixed drink titles stretches from the sexy (Buttery Nipple, Screaming Orgasm), to the mundane (Tequila Sour, Martini) to the downright bizarre (Fish House Punch, The Monkey Gland).

And then there are these eight cocktails, which not only sound tasty, but sound deadly.

1. Death in the Afternoon

Invented by the famous author Ernest Hemmingway, and named after one of his novels, Death in the Afternoon might sound like an ominous way to start your day, but is actually a pleasant mix of champagne and absinthe. In locations where absinthe is hard to come by, it has been known to be replaced by a strong pastis, such as Pernod.

While an executioner might be excited at the prospect of his next victim’s blood, it doesn’t make a very good cocktail ingredient.

But luckily for us Slosh-heads, Hangman’s Blood is a refreshing mix of rum, gin, brandy and porter, instead of the gruesome end in which it sounds.

The living dead are one of the most feared monsters in all of folklore. And for good reason. But the zombie cocktail doesn’t so much turn you into a zombie, as it does make you sound like a zombie once you start slurring your words.

The Zombie’s deceptively high alcohol content is hidden by its smooth, fruity flavor.   Zombies’ are served on the rocks, and include brandy, rum and fruit juices.

I’ll be the first to admit that jumping into a flaming, erupting volcano isn’t my idea of a good time. But this group cocktail is a tasty mix of rum, brandy, pineapple juice, almond syrup, and other flavors, depending on the bartender.

While some people drink for the sole purpose of paralysis, the thought of not being able to move is a shared fear among many. The Paralyzer features equal parts tequila, vodka and coffee liqueur, mixed with 4 oz of cream and 4 oz of your cola beverage of choice. AND it only paralyzes you if you wish to be paralyzed.

You don’t get much more ominous than the four horsemen of the apocalypse. The Four Horsemen is a cocktail of four liquors, traditionally bourbon, Irish whiskey, scotch and Tennessee whisky, though a tremendous amount of variety exists depending on which bars you happen to be hopping.

I wouldn’t want to put any sort of beverage with the word nuclear in its name past my lips, but Nuclear Iced Tea is harmless enough. A variety of Long Island Ice Tea, Nuclear Iced Tead contains vodka, gin, rum, triple sec, melon liqueur, and  7-Up soda.

If I happened to be taking a leisurely stroll through Harlem at 2 am and just happened to encounter a mugger, I’d almost certainly freeze up to the point of paralysis. But perhaps if I had a bit of the Harlem Mugger cocktail flowing through my veins I’d have some of the drunk courage. The Harlem Mugger contains vodka, gin, white rum, tequila, champagne, cranberry juice and a wedge of lime.