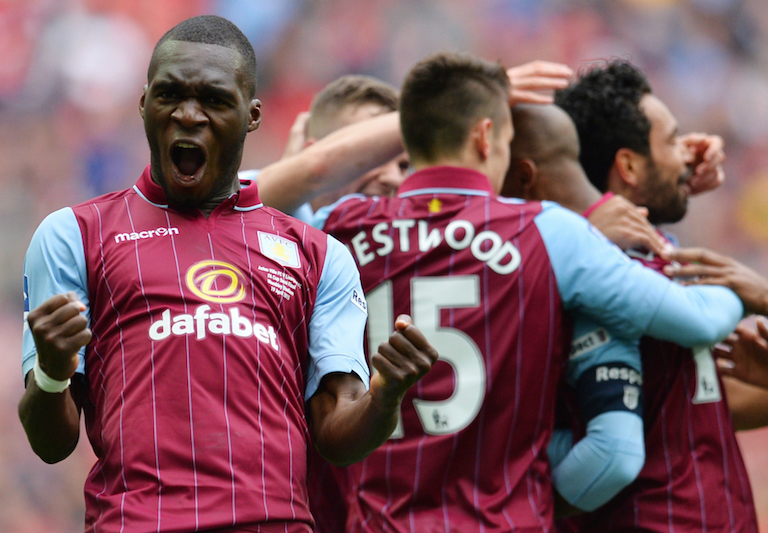 Liverpool’s hopes of lifting their first F.A Cup since 2007 were brought to an end by relegation-threatened Aston Villa at Wembley stadium on Sunday afternoon. Brendan Rodgers men threw away one-goal lead as they slumped to a 2-1 defeat.

The Reds were favorites to progress and went ahead after only 30 minutes through Philippe Countinho, but Villa fought back to book their place in the final against the Gunners on May 30. Christian Benteke equalized in the 36th minute before Fabian Delph capitalized on poor defending 9 minutes into the second half.

This was Liverpool’s third defeat in their last four games across all competitions. The F.A exit will pose questions over the Reds lack of fighting spirit in big games having suffered the same fate at home to Manchester United and away to Arsenal. Steven Gerrard’s 35th birthday coincides with the F.A Cup final on 30 May.

The defeat ended Gerrard’s dream of lifting a silverware on his birthday before leaving for L.A Galaxy in the summer. As it was, time appeared to have crept up on the Liverpool captain as he found himself beleaguered by the brilliant Aston Villa side.

The Liverpool skipper, like all of his teammates, underperformed during his side’s shock defeat as Brendan Rodgers switched formation twice only to be outperformed by Villa. Tim Sherwood’s men approached Sunday’s showdown with a plan–a clear indication that they wanted to play the finals. They showed mental strength and greater hunger.

The defeat means Liverpool must focus on finishing in the top four which most sports analyst believe will be settled by a small margin. The misery of their injuries and ineligibilities meant that the team struggled against a rejuvenated Tim Sherwood’s Villans.

The absence of Daniel Sturridge, Adam Lallana, Mamadou Sakho, Jordon Ibe and Lucas Leiva meant a return of Gerrard who had served a three-match ban. Rodgers switched the formation from 3 in defence to 4, with Lazar Markovic playing at the back.

The Red’s first chance came in the 7th minute when Coutinho rolled the ball for Joe Allen to shoot but his shot was too high. Villa responded almost immediately but Charles N’Zogbia shot from range wasn’t strong enough to beat Simon Mignolet. Villa missed a chance to take the lead on the 16th minute when N’Zogbia played a pass to Betake.

Raheem Sterling saw a penalty appeal turned down when he was fouled by Delph before Villa lost Nathan Baker after the defender landed awkwardly when challenging for an aerial ball. By then, the Liverpool boss had seen it all, changing formation in a bid to boost his side which was starting to live by its nerves.

The Reds converted one of its early chances into a goal when Villa defenders failed to clear the ball from danger, allowing Sterling to play a pass to Philippe Coutinho who made no mistakes. However, the lead didn’t last long, as Benteke scored his first of the day and his 9th goal in his last seven games. This was Villa’s first ever FA Cup semi-final goal in almost six decades.

In response, Rodgers switched formation again with Gerrard pushed back to aid the defence. As time ticked down, the scarcity of Rodgers’ options was apparent. Dejan Lovren free header minutes before half-time went wide but Liverpool was fortunate to make it to half-time without further miseries.

The introduction of Mario Balotelli early in the second half was not enough to contain Villa who continued to press as Christian Benteke saw his shot deflected by Simon Mignolet. Delph’s winner on the 54 minutes was another beauty, with Benteke and Grealish working the ball through the Reds before Fabian Delph directed the ball past Mignolet.

Despite Villa’s pressing game, Liverpool had enough left in the tank to equalize with minutes left. Steven Gerrard’s header was cleared off the line by Kieron Richardson. Aston Villa was victorious at Wembley despite the linesman wrongly flagging Balotelli offside late on when the Italian forward may have scored.

Liverpool currently sits fifth on the table, seven points behind 4th-placed Man City with one game in hand. The Reds will aim to go back to their winning ways when they visit West Brom on the weekend. Tickets for Liverpool matches can be purchased across numerous sales channels, subject to the particular selling details promoted for every individual match.