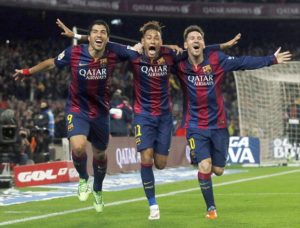 Manchester United recently forked out a whopping £90 million on a player to break the all-time record across the footballing community. However, what is more surprising is that Paul Pogba actually played for Manchester United some years earlier and they let him go on a free transfer. The circumstances around that situation are complex, but many people have read into the comments then manager Alex Ferguson published in his autobiography, regarding Pogba’s attitude as being the catalyst for him leaving the club.

Here is a list of the most expensive players in football history:

As mentioned before, Pogba had actually been on Manchester United’s books earlier on in his career, but left on a free transfer to go to Juventus. Just four years later, Manchester United saw the error of their ways and brought him back to the club for a world record transfer fee. Pogba has had a mixed start to this second stint at the club and critics argue that he isn’t playing anywhere close to the level that his price tag commands. Time will tell whether he goes on to justify his fee.

Real Madrid are renowned for their desire to recruit a ‘Galactico’ each year. Firstly, they look for the best players in the market before using their financial prowess to buy said player. Apparently they have no limit to their spending, and Tottenham Hotspur were able to play hardball and hold out for a higher fee than first offered. Bale himself was said to be pushing for a move, and given that his team’s Premier League title odds were quite high, he wanted to move to a club where trophies were practically guaranteed.

Gareth Bale was excellent in the Premier League, but many football experts questioned how he would fit into a team with the level of talent already at Real Madrid. It’s fair to say that Bale proved these critics wrong and has more than held his own in the Spanish La Liga, helping them to acquire more trophies with some great individual performances.

Bale’s current team mate, Ronaldo, is the third most expensive player in the world of football, at a staggering €94 million. Being another player that had set the Premier League alight, Ronaldo was keen on moving  to Spain, closer to his home country of Portugal (he probably preferred the weather there too). Ronaldo has gone on to write himself into the record books at Real Madrid, becoming the all-time top goalscorer in the UEFA Champions League, as well as Real Madrid’s all-time leading goal scorer. At 32, he has a few years left to extend his many records, meaning he will probably continue making history over the next few seasons.

The fees paid for footballers can seem ludicrous, but if they deliver success to their clubs, then they can pretty much pay back their fees through the revenue that they generate.