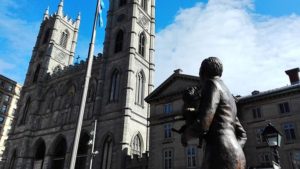 For centuries, the “Old World” has been a draw for North Americans. The allure of Europe, delightful food, historical ruins, and ancient legends has made it a popular and accessible tourist destination for many. However, the flight across the Atlantic is often enough to dry up the idea of making a European holiday an annual event. Just add the hotels, food, car rental, and shopping, and you have yourself financial nightmare.

Thankfully, we have a chance to visit a little bit of Europe that is much closer to home: the Canadian city of Montreal.

Montreal is one of the oldest cities in North America, and accordingly, is steeped in history, culture, and interesting things to see and do. Since it is located in Quebec, the primary language spoken there is French, giving the city even more of a foreign, European vibe. The best part is that it is easily accessible for North Americans, thanks to the Pierre Trudeau International airport and its relative proximity to other major cities. Visiting Montreal is also an opportunity to take a road trip or to have a romantic journey by rail. In any case, you will likely be spending a lot less on transportation than if you had to hop across the pond.

Wondering what you need to add to your sightseeing list to make sure that you leave inspired by the European chic-ness of this city?

Indulge in the Food Culture

Montreal has a lot going for it in terms of food. There are some dishes that the city is known for, much like a pasta cacio e pepe is associated with Rome and a baguette brings to mind a Parisian bakery. Start your mornings off with a coffee and a world-famous Montreal bagel, get a Montreal smoked meat sandwich at a Jewish deli for lunch, and make dinner reservations at an amazing Montreal steakhouse restaurant with all the delicious traditional cuts of meat. Still peckish after a night out on the town? Grab the perfect midnight dish: poutine- crispy fries topped with a rich gravy and cheese curds.

Though the downtown is quite cosmopolitan and doesn’t differ much from any big North American city, Old Montreal is a sight to behold. The cobblestone streets are lined with beautiful stone buildings now housing charming little restaurants and boutiques. This is the closest you will get to Parisian flair on the North American continent.

Shop ’til You Drop

Montreal is definitely the fashion capital of Canada, don’t believe those Torontonians! Many Canadian labels are produced here, a place where the garment district isn’t just a fancy name for a neighborhood. From large department stores like Simons, to small local designer boutiques, everyone will find something for his or herself. Find inspiration in the street style you’ll see, as the fashion is much closer to what you would find in eclectic Europe than in more conservative North America.

Soak in the Culture

Montreal is full of galleries, museums, and other attractions, from the Biodome, to the Olympic stadium. A rainy day on your trip is actually a blessing in disguise as this will encourage you to explore these amazing indoor spaces and soak up some culture during your Montreal stay.

Not every budget allows for an elaborate trip to Europe. However, a trip to cosmopolitan Montreal is much more manageable for those looking to get a European feel for a fraction of the cost. And though you might want to pack a French phrasebook just in case, you can enjoy the charm of the city while still being able to comfortably communicate with those who live here.