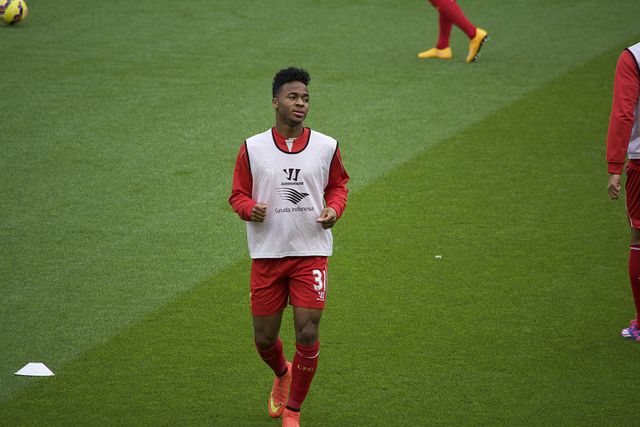 By the looks of this week’s front pages, Raheem Sterling may be finding himself in hot water again at Liverpool FC.

The rumour mill has it that this latest news will see him suspended. It could have a serious impact on Liverpool’s top four hopes and even their hopes of European football, they sit just three points ahead of seventh-placed Tottenham Hotspur. If correct, don’t expect the boys at bet365 to keep them at 14/1 in the betting to finish seventh or lower for too long.

The 20-year-old England international has had a somewhat controversial fortnight, which all started with a very poorly advised interview with the BBC – not sanctioned by Liverpool – in which he spoke about turning down £100k a week. ‘Another week, another PR disaster for Team Sterling’ as Kop legend Jamie Carragher so wisely put in his weekly column with the Daily Mail.

If reports are to be believed, the young forward is reportedly after £150k a week and his agents are aware of interest from Arsenal, Chelsea, Bayern Munich and Real Madrid. True or false, the interview was a complete mess. Current or prospective employers will be put off by such demands, especially with a player who is nowhere near the top bracket in world football, yet.

This whole debacle made poor Raheem and his measly offer of £100k a week a moving target for the media. So you would think he would have laid low and got his head down in hope the dust would settle until the end of the season. Think again, the winger added yet more smoke to the fire when he was caught on Snapchat seemingly with a Shisha pipe. The photo had a caption that read “1 down another 3 to go” implying he was nowhere near finished for the night.

Things looked to be back on the up on Monday night as Sterling helped his side get back to fifth position, scoring a superb individual goal as Liverpool cruised to a 2-0 win over a hapless Newcastle United side. The magic is there, that is plain for all to see. It is the consistency that has the big wigs at Anfield reluctant to meet his demands. For every solo goal, there is a small mistake, as witnessed on Monday when he missed an easy chance to grab a brace. Potential to be a world beater? Sure. Finished article? Not a chance.

And so, just as things were looking all rosy in Camp Sterling again, another story emerged in the news agenda. Video footage showing the wonder kid allegedly sucking the controversial legal substance nitrous oxide, commonly known as laughing gas, was making the headlines. He is not the first (Kyle Walker) and he will not be the last to be caught taking this popular legal high, but with all the controversy around him lately, the FA may look to bring him down a peg or two.

With player power at an all-time high in modern football, perhaps Raheem Sterling is going down the Luis Suarez route of forcing a move. Brendan Rodgers may just want cash in at the end of the season, whether the Man City’s and Chelsea’s of this world will stump up the cash is a different matter.