The concept of the “Rite of Passage” is seen in all cultures. It’s a universal mark indicative of transitioning from adolescence to adulthood in order to be accepted in a social group. From Aborigines in Australia to New York, rite of passage is used to separate the men from the boys. Today we dig deep into some of the most horrific rites of passage in modern times and compare them to a range of rites in the US. None of them seem to rival “Hunger Games”, but they definitely are unique.
Prev2 of 9Next 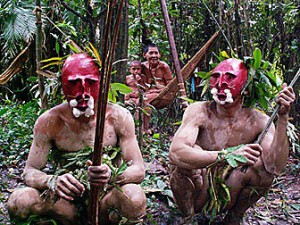 Deep in the Amazon, the Matis tribe transitions an adolescent boy into a hunting man through 3 stages of pain.

For some reason, I would rather drink Colt 45’s to create nausea than take some frog poison.

Image Source Size her up but be subtle about it. You don't want her to think you’re a creep or...