The concept of the “Rite of Passage” is seen in all cultures. It’s a universal mark indicative of transitioning from adolescence to adulthood in order to be accepted in a social group. From Aborigines in Australia to New York, rite of passage is used to separate the men from the boys. Today we dig deep into some of the most horrific rites of passage in modern times and compare them to a range of rites in the US. None of them seem to rival “Hunger Games”, but they definitely are unique.

Rite of Passage Outside the US

For the Australian Aborigines, an adolescent boy becomes a man when he goes on a trek across the outback for up to six months together with his father, his grandfather and the local spiritual leader. This walkabout is a way to show the boy what it means to be an Aborigine by bonding with the land of his ancestors. They would follow the trails their forefathers took. Picking out their heroic acts, the boys would mimic them to show how much of a man they are. I doubt there are any Batman style heroics they have to imitate, but it’s a challenge none the less.

Deep in the Amazon, the Matis tribe transitions an adolescent boy into a hunting man through 3 stages of pain.

For some reason, I would rather drink Colt 45’s to create nausea than take some frog poison.

East Africa’s Maasai tribe is notorious for its rite of passage. The ritual involves hunting a lion using only spears. Traditionally, this was a one boy show. The amount of lions available had started to dwindle, so they changed the rules.  Hunting is now done by boys all similar in age. Killing injured lions are deal-breakers; the boys have to track a healthy, fully-grown lion for days and confront it using spears. This sounds like a modern day Braveheart with ferocious lions instead. I wouldn’t suggest trying to mimic this at your local zoo with your plastic Spartan spear you used for your Halloween costume.

The Algonquin tribe has a pretty interesting ritual that separates the men from the boys.

It’s common for some Algonquin boys to suffer memory loss to the extent that they forget their own identity or they lose the ability to speak. If the boy, upon returning to their village, is able to recognize his own childhood, he will be given a second dose of the drug just to nuke the brain a second time. Now that’s tough love.

The Sambia Tribe’s Rite of Passage is considered as one of the cruelest of all. It involves mutilation, lots of blood and being forced to “copulate” with the tribe’s oldest warriors. All done in six simple steps, quick and painless, right? No, the six stages are spread out between 10 to 15 years. The Sambia Tribe’s six stage Rite of Passage includes:

Done in most college and universities, the keg stand is not as easy as it seems. It requires a massive appetite for alcohol and some semblance of balance. In order to be a pro, you have to keep yourself steady while chugging down beer upside down. Repeated keg stands may result in projectile vomiting topped off with a crippling headache, dehydration and a strong dislike for one’s self. It has been said that the keg stand will erase all memories of being a boy, and grow hair on your chest. There have even been reports of boys saying they are Burt Reynolds after a weekend full of keg stands.

Hundreds of coming of age movies demonstrate the importance of losing one’s virginity to become a man. If life isn’t awkward enough for teenagers, boys have to go through several painful rejections (even from the geeky girl with glasses). He’ll have to ride the tidal wave of rejection and hurt before he can finally find (or convince) the one to lose his virginity to. It’s not all it’s cracked up to be, as the 40 Year Old Virgin can attest to. The good news: we can help you lose your virginity with the Gentleman’s Guide to One Night Stands. 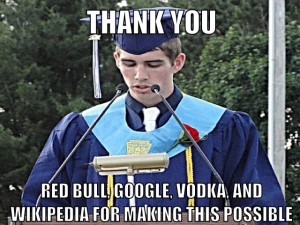 While high school graduation is considered as a common rite of passage in various parts of the world, this ritual is especially grueling in the US. Boys spend four years of their lives being scrutinized by their parents, being at the mercy of their teachers, and being bullied by their peers. Adding to the emotional toll of this ritual is years spent being rejected by popular high school girls or being turned down (politely) by college girls. Finally, you are forced to walk across a stage acting like you actually deserve the piece of paper being handed to you. Graduation is such a tough feat, some believe it is more humane to quit school altogether.

Endured by United States Army Airborne School, United States Army Air Assault School and sometimes, by the Army Aviation and Aviation Logistics community, the Blood Wings initiation rite is traditionally used to weed out the pansies out of the Army. It’s the stuff nightmares are made of, let me tell ya. Once a graduate receives his Parachutist Badge, his comrade or an instructor will place the pin of the badge pointing to the chest. He will then gleefully puncture the flesh of the graduate with it. If you’re lucky enough and the graduation is affiliated with a unit number, say 20, the pin will be pounded on your chest for, you guessed it, 20 times. Bring on the pain.