Ask any baseball, basketball, or hockey fan – they follow their favorite teams as if it were their religion. Their dedication puts Tom Cruise to shame. You think he’s so loyal to Scientology? Well, that’s because you haven’t met the most devout fan of the bunch. The more successful the team is, the easier marketing should be. In fact, some team owners don’t need to do much but sit on their asses and announce to the rest of the world when the next game is.

When the Yanks or Dodgers are in town, every seat in the stadium is sure to be warm at the end of the night. The NBA playoffs? Fans stay as near to the court as possible just to see Lebron James up close and personal. If they could bottle his sweat and sell it as perfume, don’t ever doubt that they would!

Okay, so we can ramble on and on about what the fans are capable of doing, but you get the gist. You don’t need to do much to draw the crowd. Bobbleheads and blankets may have worked, but some of the gimmicks implemented were just downright disastrous. Seeing the players in action should have been more than enough, but then again, there’s a fool born every minute.

Team owners adopt a lot of maxims in their careers, all of which involve luring in hoards of people. Here are just some of their most ridiculous efforts: 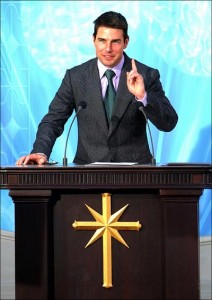 Speaking of the great Mr. Cruise, the Ft. Myers Miracle minor league baseball team is no stranger to unique tactics. The plan was to showcase images of Tom Cruise and other famous scientologists to get people entertained. People simply needed to pay $5 for their seats. Did it work? Nope! People were more invested in seeing the Dave Matthews Band tribute that was slated after the game. The owners should have known that after that couch-jumping incident in Oprah, Mr. Mission Impossible himself was already set to self-destruct in 5 seconds.

Let us know in the comments which ones you think are the best (or worst!)

More in Did You Know?, Humor, Sports

The Year in Beer: Beer Drinking in America by Volume

What half the world population wouldn’t do for beer! The word alone would send several hearts aflutter. Men consider this...