The world of modern technology is a fascinating one. Who would’ve thought that losing a limb, although tragic, doesn’t always have to be an entirely horrible thing? With advances in technology by institutions like the Center for Intelligent Mechatronics, RSLSteeper and even NASA, the future of an amputee isn’t too bleak. Prosthetic arms, legs and even eyeballs have been conceptualized and brought to life in this advanced universe of ours. And how lucky are we to live in the 21st century. Take a look at some of the coolest prosthetics on the planet, from their origins to what they look like in present day. 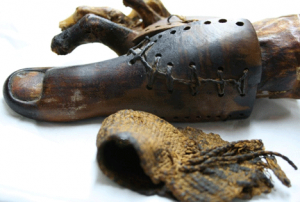 The oldest prosthesis known to man is a wooden- and leather-made toe. Found buried with the remains of an Egyptian woman, it was preserved so well that it actually still looked quite usable. I guess losing a toe in ancient Egyptian times wasn’t so bad. And I guess preservation really was their thing.