Larry David is a genius. He’s a grumpy old fart who takes sarcasm and humor to a whole new level. While a jaded old man seems a little too generic on paper, you should actually listen to what Larry has to say. He deals with life’s quirks differently. And you can bet that you’ll get a laugh (or a rise, depends on who you’re taking to) whenever you do this. His beliefs will shock you, but he’ll also get you to agree with him at times, if not all the time.

Larry David entertained audiences in Seinfeld. He may not have had any screen time, but you’ll get a glimpse of that otherworldly humor in Curb Your Enthusiasm. Use tThese are Larry-isms. Use them well. You may not win over the girls, but you’ll get some of fans along the way. 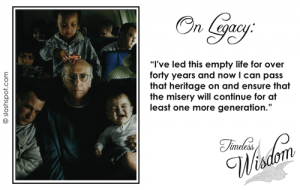 You get more than just DNA from your parents. You also get some of their traits. Here’s to hoping that your mom and dad are actually great people, or else you’re doomed. 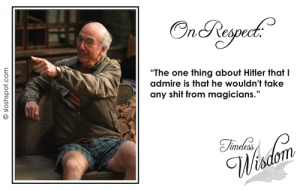 Hey, Hitler didn’t take shit from anyone, but after some time, the people couldn’t take any more of his shit either. Well, whose neck hung on a noose at the very end?