If you’re a child of the 80’s, you’ve tried at least once in your lifetime to dial the number 8675309 looking for Jenny. But even if Tommy Tutone isn’t a speck on your iPod, bathroom wall graffiti is still commonplace. Drunken time spent in bathroom stalls, whether doing number 2 or puking your guts out, is as popular now as it was in Michael Jackson’s time. Although I wouldn’t go as far as to call these vandalizers “artists”, these walls have never been as humorous. Take a peek at some of the best, if not insulting, bathroom graffiti.

For a good time… 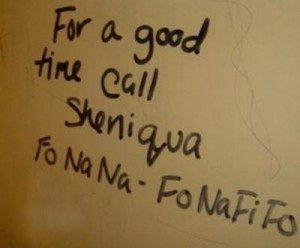 In the early days of bathroom graffiti, things were as simple as leaving a name and number on the wall. But for those like Sheniqua, they decided to up the stakes a little more. Why not give her a call? It’ll probably be a good time FO SHO!