Every bad boy or bad boy wannabe needs to know one name: Hunter S. Thompson. Or, you can simply call him HST if you want to be cool about it.

So, who exactly is this man? HST is an American author and journalist best known for his flamboyant style. His words have given birth to the term Gonzo Journalism. Basically, this means that the man is a genius. That’s because he managed to blur the lines between real and fiction, distinction between the writer and subject.

Obviously, this man mixed substances to get in touch with his uncanny and artistic persona. He provided nuggets of wisdom while on an alcoholic and drug binge. Thus, it makes you wonder if the stuff people consider poison is actually the greatest invention in all of history. Think about it! Edgar Allan Poe wrote better when he was drunk, and where is he now? In the writer’s hall of fame, of course! So, HST is actually an underappreciated genius who has now raised himself to a class that not too many writers find themselves in. He’s in league with the greats – from Shakespeare to Mr. Poe himself.

Instead of rambling on and on about how amazing HST is, let me give you posters of the man who has given us some of the best quotes to date, most of them worthy of a spot in the national museum: 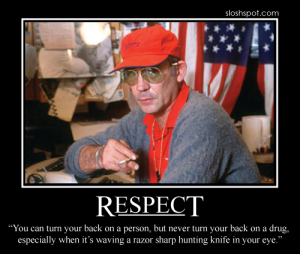 This explains why people have become better acquainted with some of the most potent substances.

Prev post1 of 14Next
Use your ← → (arrow) keys to browse
So, which ones motivate you the most? Let us know in the comments below.

How to Write a Passive Aggressive Note

How do you get on someone’s nerves quickly? Be sarcastic. You’re sure to catch the person’s attention. Just get ready...