Acting can be an unforgiving profession. As with most creative and artistic endeavors, one has to develop a thick skin and learn to deal with rejection in a healthy and productive way. It is during those first formative years as an actor that this vulnerability is most keenly felt. An understandable and natural fear of such rejection often pushes young actors away from taking risks and can lead to a career stalling before it’s even begun. Whether you’re hoping to pursue lucrative work in film or television, or you’re wedded to the stage, or you even just want to perform in front of a camera with friends, the way you approach your acting will have a dramatic impact on how successful you are. Below are some top words of advice for new actors, taken from various pieces written by, and interviews with, actors who have already established themselves. 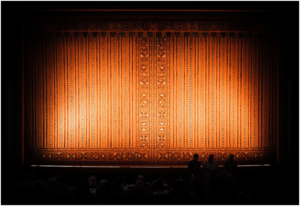 This is an important rule to follow for anyone hoping to work in a creative industry such as acting. Only in very rare cases are people simply born with a particular talent. It takes time and hard work to perfect a craft and that means that you, just like everyone else who has come before you, will have to contend with that early stage of your career where you will inevitably not be a very good actor. There’s nothing wrong with not being a good actor, or a good writer, or singer, or anything else you care to think of, from the get go. Whenever you are faced with the inevitable rejections and criticisms, do not interpret them as a failure. Instead, see them as an opportunity to identify problems and to improve your performance.

Always Be on The Lookout for Opportunity

Every acting gig that comes your way is a new opportunity, and even an unsuccessful audition is still a prime opportunity to learn and to refine your skills. As well as the usual avenues of finding work such as adverts for local productions and the occasional casting call from a major film studio or television network, there are other ways of getting noticed for those with the will and resolve to pursue them. There is now a whole genre of television shows dedicated to discovering new talent and giving previously unknown individuals a taste of the spotlight. This provides an opportunity to work with established producers such as Michael Palance, whose new show My Hollywood debuts later this year.

An agent should be the first port of call for anyone ready to get serious about their art as a career. Agents come with the right contacts and know how to rapidly accomplish what could take an individual weeks or months on their own. Agents also have experience working in the industry and can advise you on the most prudent moves to advance your career.

Starting out as an actor is hard and making the wrong moves early on can seriously hold back your career at its most crucial stage. But, by following the advice above and adding a little common sense of your own, you can easily make the most of any and all opportunities that come your way and be well on your way to a successful career.