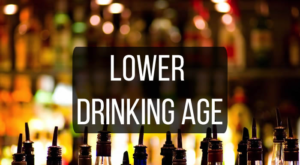 Alcohol consumption is a relevant problem that touches upon people of all ages. In every country, the attitude towards alcohol is specific. Some states have traditional drinks and rich alcoholic culture. Other countries do not pay attention to this issue at all. In some countries, people are permitted to buy and consume alcohol from the age of 18. Other states increased this barrier up to 21. The USA is one of them. No wonder, many its citizens do not understand why they cannot purchase and consume alcohol at the age of 18. It is possible to understand their concern because there is a paradox. An 18-year-old citizen of the USA can vote, drive a car, get married and work legally. However, he cannot drink alcohol. Although it can sound strangely, there are many arguments that prove that people should not consume alcohol until they reach the age of 21.

In many countries, there is a compromise. 18-year-old people can buy and consume low-alcohol drinks. Such drinks as whiskey or vodka can be bought only from the age of 21. In fact, this compromise is useless. On the contrary, people start drinking beer and other low-alcohol drinks and they get used to this lifestyle. They are prepared for the consumption of the strong drinks. When a young person tries beer and gets the unlimited access towards it, she will want to try something stronger. In addition, it was proved long ago that low-alcohol drinks (beer or wine) are more addictive. In simple words, a young person is under the risk of becoming an alcoholic if she consumes beer whereas she can drink much of it at once. Moreover, drinking beer can become a habit. When one drinks beer every day, his organism gets used to it. His blood always contains alcohol. Strong drinks are less addictive because very few people will agree to consume it every day.

It is impossible to permit young people to consume alcoholic drinks because of numerous psychological reasons. Young people want to try everything. If they have a chance to try beer, vodka or marijuana, they will definitely try it. Thus, the only solution is to limit the access towards these substances. There is hardly an 18-year-old person who can control herself. Young people live under the constant group pressure. If you want to be a part of a group, you ought to act in the way they do. If they consume alcohol, you ought to drink it too. Therefore, it is better to limit access towards alcohol inasmuch as young people are vulnerable towards it.

It must be admitted that consumption of alcohol can interfere with the educational process and socialization. When young people do not know how to entertain themselves, they start thinking about smoking and drinking. The image of college life in popular culture has become so close that young people will definitely follow this lifestyle whereas they favorite characters from the popular comedies entertain with the help of alcohol. According to the general point of view, college life is limited to heavy drinking and constant partying. Without doubt, nearly every young person who decides to study at college will dream about the same lifestyle. Thus, alcohol must not be sold to such young people.

Many supporters of the lowering of drinking age say that many European countries permit 18-year-old people to buy and consume alcohol. In fact, we cannot compare the USA and Europe. Nearly every European country has ancient alcoholic traditions. Some countries belong to ‘beer cultures’. Others are traditional wine or vodka drinkers. In simple words, alcohol is traditional there and people are not excited about it. In Italy or Spain, it is normal for a 12-year-old child to drink a glass of wine once a week. These people have ‘natural resistance’ towards alcohol due to the long-lasting drinking traditions. Alcohol causes less harm to them.

They rarely suffer from addiction. Many Asian or Muslim countries do not consume alcoholic drinks at all; therefore they do not possess this ‘natural resistance’. A single mug of beer can make them drunk. We all know that the Native Americans were very vulnerable towards alcohol and it was one of the reasons of their disappearance. The USA is the country of immigrants from all over the world. There are immigrants from Europe, Asia, Africa and Australia. These people belong to different cultures and it is dangerous to let them consume alcohol at the age of 18. For instance, a young and careless representative of a non-alcoholic culture tries accessible beer or vodka and he becomes an addict whereas he cannot control himself. It is possible to protect such people from alcoholic addiction preventing them from buying it.

The most reasonable and solid argument is the harmful effect of alcohol on our organism. Our body grows and develops up to the age of 21-23 years. If an 18-year-old person drinks frequently, there is a risk of the interference with the development of his brain and other systems of his organism. Therefore, the best decision is to avoid selling alcohol to the young people.