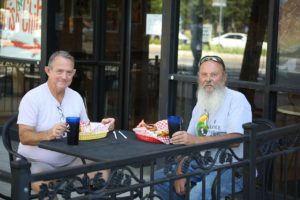 Dealing with the physical signs that men are no longer as young as they used to be, can be rough. From the doses of grey that come in to the loss of hair, these are the notable signs that men are indeed aging. But there is nothing men can do about it but accept it, or is there?

The battle against grey

Going grey shouldn’t be something to be terrified about. It should be seen like a normal passing of time. But there are times when going grey just upsets our natural balance of things. No one likes going grey in their mid-twenties, or even their thirties or forties. We want to look as young as we can for as long as we can.

Even a company like Schwarzkopf hits this nail on the head perfectly:

‘Hair coloring is not exactly topic number one among men. Most men rather keep such issues to themselves. Some men decide to age with dignity, others at least want to create this appearance. Luckily, there are great ways to look better without showing up with obviously colored hair’

Men don’t actively create a market for hair dyes, rather companies have gone proactive and made products that will help cover up the grey men get. While it may seem like a niche thing, men do have a way to deal with a grey head of hair, or how to make it easier to conceal thinning hair while looking natural doing it.

Just like there is a colour solution for a head of hair, there is also one for a man’s facial hair. Just for men is a wonderful facial hair dye brand that helps ease a man into their grey by letting them determine when the time is actually right.

It is worth noting again that some take it in stride while others won’t. Now, you have a choice whereas before these products existed, the choice wasn’t there. Personal choice has finally been given to men to hide this visible effect of aging.

Losing hair on the other hand isn’t as simple as grabbing a wig or toupee. Those remedies are way too feminine for men. But, they used be the only remedies. Nowadays, we have viable remedies to slow or reverse the loss of hair. However, it is also a topic of discussion that men don’t usually take part in. Thankfully men have a choice in corrective actions, or to take it in grace.

There is actually a standard to male baldness, it’s called the Norwood Scale. The Belgravia Centre details the stages a man can expect when they first notice a receding hairline. They also outline some possible treatments. Be sure to check the severity of your balding pattern and what is generally recommended for treatment. Always consult a professional before taking drastic measures.

The science behind hair loss shampoos has come a very long way from their early days. Since the advent of compounds like minoxidil and ketoconazole and the use of natural ingredients like emu oil or rosemary oil, and nettle extracts, these ingredients have come to the forefront to give men multiple options to find a reversal to hair loss in the form of a shampoo

Hair boosters are a supplementary item that are supposed to be used in conjunction with certain hair loss treatment regimen. They are usually made up of vitamins that the body may be lacking. Depending of the makers of the booster, it can come in pill or a cream form that is used directly on the scalp to help stimulate hair growth.

If there is an Over The Counter (OTC) treatment available, it’s all thanks to professional medicine. Consulting a medical professional for expert advice on the available treatments and selecting the treatment plan for you is the best way to go when you have the severe tiers on a Norwood Scale.

When they first made their appearance, it was an obvious thing. You could just tell when a guy was wearing a ‘rug’ on his head. But they have come a long way and because men have used them before, there have been strides made to getting male specific wigs to cover complete baldness or a toupee that blends very well with the surrounding hair and actually look good on both parts. If you feel that you can be comfortable with this solution, by all means rock it!

With the Aid of Grace

The only other option is to take it with a good dose of grace. This may be a very hard pill to swallow at first, but it may just grow on you in the end. This has been the go to remedy for a millennial. It has been tried and proven to be effective, and it all comes down to how the individual man handles the truth of his aging process. It won’t regrow the hair, nor will it cover the grey; but millions of men before you have come to terms with going bald before you.

How a man deals with their visible aspects of aging relies on how self-conscience they are, and to be cruel about it; how vain they may want to be. In all reality, it isn’t vain in the least, because let’s face it; no one really wants to show off their age until there is no other choice. It all comes down to the individual, and remember, it is perfectly ok to not change the way your age is treating you.

Combatting grey is far simpler than combatting hair loss, but the perspective is more severe. Does having streaks of grey really make you distinguished in your eyes? Or does it make you feel older than you really are? These are the main points that someone with greying hair need to answer for themselves. Keep in mind that there are products out there that will let you decide when it’s time to be grey.

Hair loss, on the other hand, is not so easy to cover up. Well, wearing a wig or toupee may actually do it, but pick the wrong ones and everyone will know anyway. Talk with a medical professional before just grabbing the first thing on the top shelf. Remember that for every item that actually works, there are a hundred that won’t.