Has it ever occurred to you that you don’t actually know any ventriloquists? Probably because their so-called talent is one of the lamest forms of art out there, if you can even call it that. With its origins being in religious practices, these dolls were used as a medium to voice the thoughts of the dead, as well as foretell the future. Too bad these dummies changed so much throughout the years. Unlike voodoo dolls, which still manage to scare the living daylights out of people just by their presence, ventriloquist dolls didn’t succeed in maintaining their cool factor. Instead, they become comical figurines used to entertain all kinds of audiences from those attending street fairs to those visiting the circus. And if these entertainers were hoping to make any leads in the romance department, this job is so not the way to go. I mean, talk about creepy. That smile, that stare – and I’m not just talking about the doll here – but pretending to have conversations with an obvious wooden figurine is just plain weird. No wonder these performers can’t seem to get lucky. Here are some reasons why ventriloquists can’t get laid. 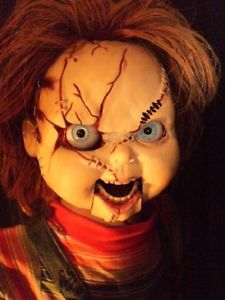 Do you remember the movie Chucky? If that wasn’t one ghoulish-looking doll then I don’t know what is. Never mind that he’s a midget-sized, scar-faced, knife-wielding little killer, but the fact that he’s a dummy just adds to the sheer horror all together. If I was invited to go home with some dude who wanted to get it on with some psycho-looking doll sitting on a chair watching us, I highly doubt I’d even go past the front door. Even if Chucky is put in the closet, the idea that the doll is just there lurking in the wings will make anyone go screaming for the hills.