The concept of the “Rite of Passage” is seen in all cultures. It’s a universal mark indicative of transitioning from adolescence to adulthood in order to be accepted in a social group. From Aborigines in Australia to New York, rite of passage is used to separate the men from the boys. Today we dig deep into some of the most horrific rites of passage in modern times and compare them to a range of rites in the US. None of them seem to rival “Hunger Games”, but they definitely are unique.
Prev6 of 9Next 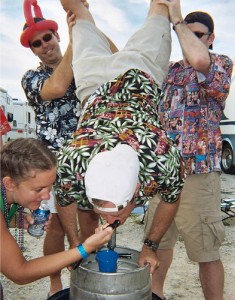 Done in most college and universities, the keg stand is not as easy as it seems. It requires a massive appetite for alcohol and some semblance of balance. In order to be a pro, you have to keep yourself steady while chugging down beer upside down. Repeated keg stands may result in projectile vomiting topped off with a crippling headache, dehydration and a strong dislike for one’s self. It has been said that the keg stand will erase all memories of being a boy, and grow hair on your chest. There have even been reports of boys saying they are Burt Reynolds after a weekend full of keg stands.

Image Source The classiest way to end a one-night stand is to take her somewhere for breakfast and let her...