Who knew that in 1985, Wilhelm Conrad Röntgen would accidentally discover that you could take pictures of someone’s bones? Throughout the years, this technology has diversified and morphed into what it has become today. If there’s one thing that’s for sure, it’s that the medical world has never been the same since. From broken bones, to puncture wounds, and apparently vibrating devices stuck up in people yahoos, this amazing machine has caught them all. Take a look at these Xtreme X-rays. 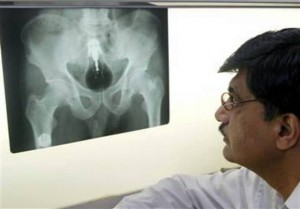 How a prisoner in Pakistan happened to get a light bulb stuck up his you-know-what is still baffling the medical team that removed it until this day. Although he claims he doesn’t remember how it got there, I’m pretty sure many have their own ideas. Although in all honesty, I don’t even want to imagine what that was like going in, or how they managed not to break the bulb in the first place.