Samuel Langhorne Clemens, aka Mark Twain, was a man who wore many hats. He was an adventurer, an author, and a humorist. People know him for writing Huckleberry Finn. What they didn’t realize was that he led a more interesting life than the protagonist of his now famous novel.

Mark Twain definitely had an amazing sense of humor. Too bad he’s no longer here in this planet to grace us with his presence. He’s out there, riding the tail of Halley’s comet, and laughing at all of us. No big deal because we can always get to know him better through literature.

If you want a brief glimpse of what Mark Twain is like, read through our highly acclaimed motivational posters series. We may not always pick the right kind of hero, but you gotta admit that Mr. Twain has definitely earned a comfortable spot in our ode to the greats. 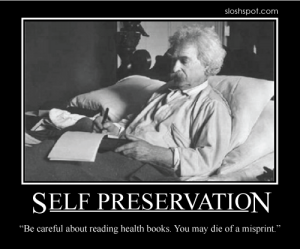 Just because it’s written in a book doesn’t automatically make it the bible truth. If it were, then all the doctors should’ve been in perfect health. 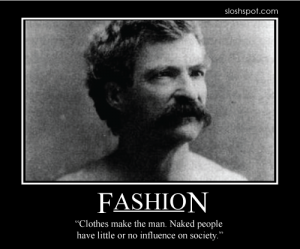 That was then and this is now. Naked people land the lead role in an X-rated movie while naked women become part of Hugh Heffner’s harem.