There’s always that one creep at work whose words haunt you before you sleep at night. You wish to rid yourself of this person, but half the time, you also wish that he’d never leave. As long as he’s tormenting someone else, then he’s always funny. But when he turns his attention to you, then he’s just annoying!

That’s exactly what Creed Bratton is in the US adaptation of The Office. As the former member of the band, Grass Roots, this man certainly marches to the beat of his very own drum. Creed Bratton plays a character named Creed Bratton! He’s embodied that office freak who gives people a reason to watch the show every single week.

Creed Bratton is a man with no shame. No one can deliver low blows like he can. Maybe if you adapted his nuggets of wisdom, then life would certainly be more interesting. Here are some of his best lines: 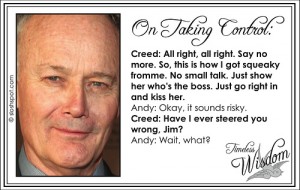 Never trust Creed when he gives you unsolicited advice. Even the solicited ones are shady enough as they are! Just run the other way!

If you’ve heard of Trailer Park Boys, then I must assume that you are either (a) Canadian, (b) Britney Spears...