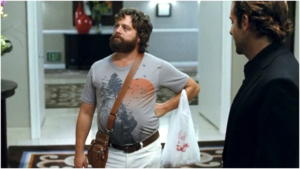 The critically acclaimed Hangover series has been roundly praised by film reviewers and casino pundits alike for its depiction of Las Vegas, being the focal point countless times in other movies such as Ocean’s Eleven, Rain Man and Leaving Las Vegas.

The ‘bachelor party’ or ‘stag party’ (depending on which side of the pond you live on) made every husband to be’s group of mates suddenly become the ‘Wolfpack’ and deep down secretly wish for a similar stag party in the City of Sin itself.

One character in particular stood out, Alan Garner (played by Zach Galifianakis) performed the comedic role to perfection and became an instant classic character which was maintained throughout the three-film series.

In honour of Alan’s rather obscure antics, we look at some of his best quotes from the hit movie franchise.

On the way to Vegas, Alan finds himself getting rather excited about the prospect of hitting the blackjack tables.

He tells his pack that “it’s not gambling when you know you are going to win” and that “counting cards is a full proof system”.

In one of the greatest scenes of the film, Alan and Phil (played by Bradley Cooper) come down the escalator just like Tom Cruise and Dustin Hoffman in the epic film Rain Man and proceed to clean up the blackjack table by counting cards.

“It’s not a man purse it’s a satchel, Indiana Jones Wears one”

If Indiana Jones wears one, it’s cool, and apparently Alan feels the same way. As Phil rips into him for wearing a “man purse” Alan pulls out this quip which is hard to argue against.

In true Alan style, we quickly learn about his ‘don’t give a damn attitude’ as the ‘satchel goes on to play a key role in the film. 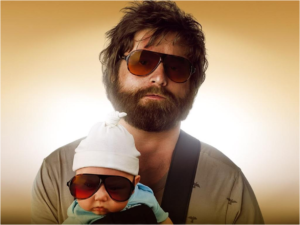 “It’s easy you just pour Kerosene over a ferret”

Yes, you read that right and please remember it is only a movie it did not really happen, when Stuart (played by Ed Helms) and Phil are discussing torching a stolen police car, Phil backs out claiming he “is a teacher and has a family”.

Stu says he will do it, before Alan pipes in asking if he can help. Phil asks how they propose on torching it and Alan calming comes in with “It’s easy you just pour Kerosene over a ferret”, he also goes on to say you could use a tame raccoon but that is probably another whole story.

“Hey there are Skittles in there”

Granted this scene is actually funnier for Stu’s line after Leslie Chow (played by Ken Jeong) stamps on Alan’s ‘satchel’ (I told you it was important) whilst searching for his $80,000.

However, Alan comes out with the line “Hey there are skittles in there” before taking a punch to the stomach by Chow’s heavy and sets Stu up perfectly for the classic line “Don’t let the beard fool you he’s a child”.

“There is a Tiger in the bathroom”

One of the most iconic scenes in the film is when Alan is politely using the gentleman’s room in the apartment after the events of the night before when he calmly notices a tiger next to him.

After a double take, Alan quickly sprints through to the main roof tripping over Phil in the process before yelling at everyone “there is a Tiger in the Bathroom”.

What makes it even worse for Phil and Stu is the fact that Alan has no pants on with Phil saying to him “Control yourself, God damn will you put on some pants”.

Disbelieving of Alan, Phil takes a look before quickly confirming that ,yes there really is a tiger in the bathroom.

“That’s me, I’ve never been on TV before”

In the classic scene where it turns out that the tiger the ‘wolf-pack’ found in the bathroom of their apartment belongs to Iron Mike Tyson, the gang sheepishly sit down to watch CCTV footage of the night before with Tyson as they try and discover clues as to the whereabouts of Doug.

It is probably not the time for Alan to pipe up ““That’s me, I’ve never been on TV before” as he is stood at the side of Mike Tyson’s pool peeing into it.

Even Alan looks a little worried as he says “should I wait outside?”.