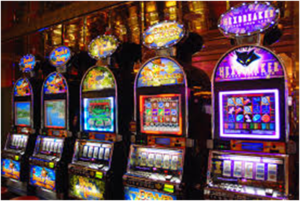 Nowadays, you can find slots machines in pretty much any casino in the world. They have become staples of the casinos in general. Slots machines are the first and last thing that you will see while you are inside a casino. They are still one of the most popular casino games, online and in the real life. But when was the slots machine invented? Who invented it? And why it did become so popular? We will try to answer all of those questions in this article. So let`s start.

The second type of the slots machine was invented much later, in 1891 by two men named Sittman and Pitt. This machine was loosely based on poker but only used 50 cards. This two types of machines were similar in some ways, but not a lot. But this was just a start of the product that has changed the way we see and play casino games.

The first slots machines were basic, simple but fun to play and attracted a lot of people who enjoyed playing them. Over time, they become more advanced and sophisticated with many improvements made. One of the best improvements was made by a Chicago-based manufacturer who first uses fruit symbols in the reels. That way the reels look colorful and inviting. Today they are still stapled of the slots machines. You will find them pretty much in any casino.

This is why slots machines are a great choice for all the people who want to start to play online casino games.

But probably the most important improvement considering slots machines was made by Bally Manufacturing when they made Money Honey, first fully electric slots machine. From that point on, the games were able to get started by only pressing the button rather than pulling the lever.  Several new features were also included and changed the way that slots machines are played. This made the games faster and more convenient for people to play.

Soon after the video slots appeared, which changed the way how you play even more and for better. You were able to choose for all kinds of slots game that are easy to play and to understand. That was the revolution that slots machines had desperately needed.

But then, on the end of the 20th century came a new way we play slots machines, new and nowadays most popular way, online slots machines. Nowadays you can probably find over thousands and thousands casino websites on which you can play slots machine games. You can play from the comfort of your home without anyone bothering you. And who knows what will future bring? What kind of innovation awaits us? Only time will tell.