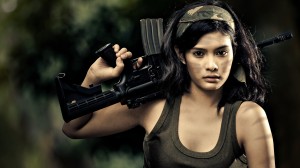 Most men like Asian women. Why? Well, this picture could definitely explain it. Maybe it’s because of their dark eyes and silky black hair. Maybe it’s because of their sweet demeanor. Maybe it’s due to the fact that there’s something unbelievably enticing about not speaking the same language and having to figure out other ways of understanding each other. Whatever the case may be, the fact that this one in particular is holding a weapon of mass destruction just adds heat to the already blazing fire. In the end, one thing is certain. This girl is hot, and the gun just makes her even hotter.