Celebrities are pretty synonymous to partying and having a good time. So what’s better than putting the two together by having them advertise different intoxicants? Many of these actors are using their ingenuity and adding their names to the labels too. Others, on the other hand, are just paid a crap load of money to herald them for someone else.  Whatever the case may be, almost everybody aged 21 and above – and many times even below – enjoy the occasional drink. Who am I kidding? Everybody pretty much loves to drink, especially celebrities. Take a look below at 8 of the best celebrity booze advertisements. 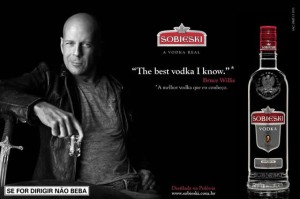 Who doesn’t love Bruce Willis? Whether it was from his early years as David Addison, Jr. on Moonlighting, or his break into stardom as John McClane in the Die Hard series, he’s a Hollywood star famous around the world. Somehow in the 80’s, wine coolers were considered cool, so who better to hire to advertise your product than Willis himself? Later on though, he probably realized that Seagram’s Wine Coolers were apparently not hip at all, and he then ended up becoming the face of Sobieski vodka, as well as a stockholder of this Polish brand. If you want to feel like a “natural born winner”, why not take a shot of this clear spirit? It may just work, at least for a night.