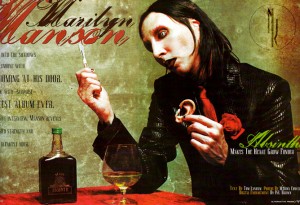 If there was a single kind of alcohol that was considered completely taboo in its heyday, it’s absinthe. With its early years being known as a hallucinogen, plus its alleged capability of making people do crazy things, it was banned for a very long time. Until this day, absinthe is regarded with curious awe and a whole lot of fear. So of course, who else but Marilyn Manson would want to reintroduce it to the drinking market? Made in Switzerland, Manson’s Absinth Mansinthe has apparently taken the world by storm. And just because Manson purports the “I’m so weird, don’t like me but secretly I need your approval” behavior, the drink itself does not. Love it, hate it, it doesn’t really matter. Apparently no matter who’s name is on the label, it sells.