10 Drunk Photos You Don’t Want To Be In

We’ve all been there! We’ve committed mistakes while we were extremely inebriated. We think we’re invincible. We dance on the ledge, attempting to show to the rest of the world that we should’ve nabbed that role for Dirty Dancing. We feel good and we think we look good. Little did we realize that it was merely the beer goggles talking. We were bigger fools than we thought.

We wake up the next day not knowing which end is up, and only when we started worshipping the porcelain god did we get sudden flashes of the night before. That’s when we mutter to ourselves, “Goodness! What have I done?!” Yep, hindsight is always 20/20. The regret comes later, but the irony of it all is that many of us commit that same mistake over and over again.

Years back, alcohol-driven mistakes were fine. Give or take a few weeks, and people move on to the next stupid prank. The memory of you totally shit-faced was shelved at the very back of their memory banks. Nowadays, it’s a different case altogether. Blame this on digital cameras and social networking sites. There’s proof of you lying catatonic on the couch while your so-called friends played one of the year’s biggest pranks on you. They got their entertainment at your expense. Poor you! But don’t fret because this is your chance to stage a bigger revenge. Look through these 10 drunken photos and take your pick. Feel free to copy any of the ideas given. By all means, use this to your advantage. Just don’t be stupid enough to let any of these happen to you ever again. 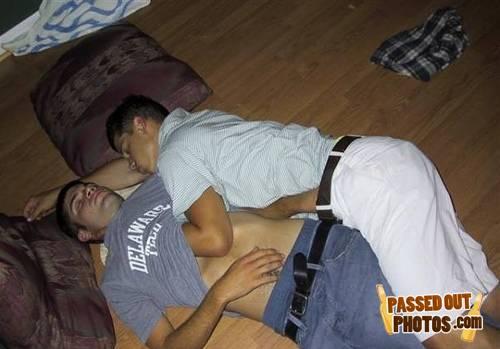 Men, in particular, think this prank is hilarious. It may even be the best one in their book and it usually happens in a testosterone-fueled party. The pros here search out their prey. They may be drunk, but they know how to hold their own when it comes to drinking. Unfortunately, not everyone has their tolerance for alcohol. So, they scrounge for drunken guys who are far from the conscious world. They haul these two men together, throw in a few props, fix the hand positions, and voila! It’s an incriminating photo that will forever scar these two hapless victims. As a third-party viewer, it’s easy to laugh about it. Be a victim, and you’ll probably even swear off water. Drinking got you in this mess and the way to stop it is to never have a drop of liquid your system – at least for a while. 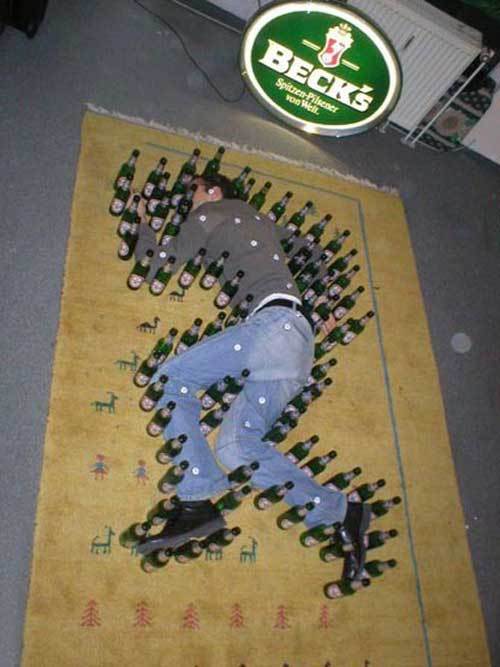 The experts of CSI outline the body’s positioning using white chalk. Of course, people get creative when alcohol plays their muse. You decide to take a catnap because you just can’t find your balance. What you thought was the bed is actually the floor. Then, you see a picture of you the very next day looking like a victim of homicide. And this is where ingenuity and inspiration comes in! Instead of using a chalk to outline your body, your friends use the bottles you’ve consumed. Now, the entire world knows just how much you drank. You, on the other hand, only remember the fifth bottle. The rest of the night seemed like a quick succession of missing drunken chapters. 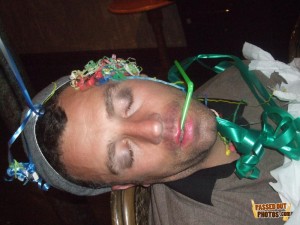 You think that just because you’re with girls, you’re gonna be safe for the rest of the night. So, you go on a drinking binge. Little did you know that women can be just as cruel as the boys, if not, more so. You’re supposed to be the man of the group, but the picture shows a different side of you. You’re now an aspiring RuPaul’s Drag Race contestant, and from the looks of it, you may even emerge as the contest winner. Your face is covered in makeup. If it weren’t so embarrassing, you may have even thanked some of your friends for doing a good job enhancing your cheekbones and full lips. Your friends are apparently aspiring makeup artists while you’re an aspiring transvestite. It’s mutualism at its finest! 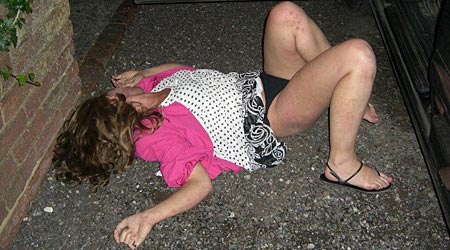 You’ve just unwittingly flashed everyone your underwear and you’ve certainly put those Playboy playmates to shame. Hey, it could’ve been worse. You could’ve worn those ratty panties to the party and made some people gag from the site of you sprawled on the floor. You only wish you could erase that memory from history. If you don’t plan to stop the booze, then always make sure that you have nice underwear on. This could be your chance to be discovered as the next Victoria Secret model. Or, it could go the other way and you’ll be in the Guinness Books of World Records as the world’s most ridiculous drunk. 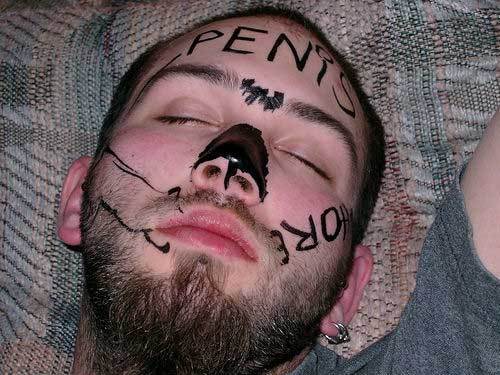 Apparently, your friends have a knack for sketching. The only trouble is, they couldn’t find a canvass to sketch on and decided to showcase their talent on your face instead. They thought that drawing a penis on your face or a beard on your chin would be so rare. Or, they might have assumed that their talent is so great that the picture could land them a coveted spot on The Louvre. Fat chance! All they achieved was making you look stupid. To make things even worse, they decided to use a sharpie, which makes it difficult to remove.  Don’t get sloshed this way ever again, or, you could always get a new set of friends and hope that your new buds are too nice to pull this stunt on you. But then again, friends that are that nice are few and far between. Secretly, you wished that you should have been the one to come up with the plan. 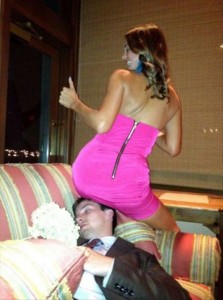 You think that you’re the one who’s making fun of the drunken dude. Then, you find yourself in just about every picture. You’re sometimes in the background, messing up every funny shot. You read through the comments in Facebook and many of these people don’t even know who you are. That’s when you know that you’ve photobombed just about every shot. You end up being the butt of their jokes because you’re just as drunk as everyone else, but what makes you the loser here is the fact that you thought you were cool. 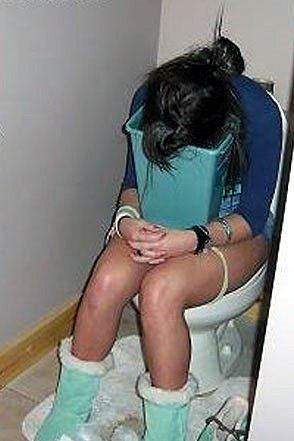 Hey, you’ve got to give yourself credit for this. You became too intoxicated that you decided to find some relief in the toilet. When you do get there, you didn’t know which end had to go first. Should you puke or do you need to pee? So, you end up doing both. At least your mess was isolated in one area. Thank heavens for this! Some of the people in the party on the other hand, decided to spill their guts in just about every corner. The party host will definitely appreciate your efforts; just give him a few weeks to recover from the tedious cleanup he had to do the very next day, and even a few more days after that. And maybe…just maybe…consider wearing a diaper to your next party.
[sociallocker id=”510″] 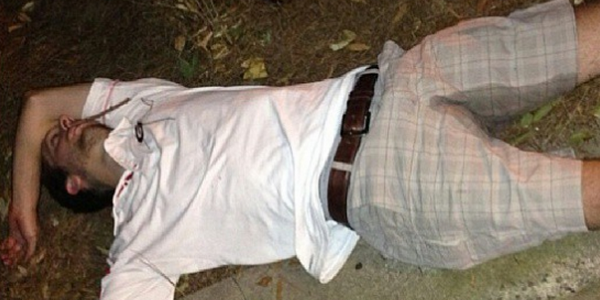 You’re so sloshed that you couldn’t control your bladder. You didn’t even realize what happened until the very next day. You get out of bed and you smelled something extremely putrid. You look down and realized that you’ve just pissed your pants. Yup, that happens even to the best of you. That’s because the urge to sleep was just too great that you couldn’t even wait to pull your pants down and sit on the toilet. This is reminiscent of those days in preschool. You had so much fun playing that you didn’t even bother going to the toilet. The only difference is that you didn’t even think about your body’s basic urges the night of the party. Instead, you worked on your number one priority: to have fun with every glass of alcohol you consumed no matter what the repercussions may be. Give yourself a pat on the back because you definitely succeeded. 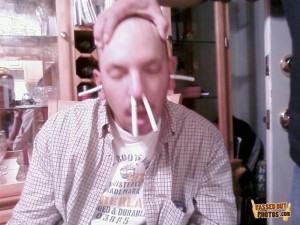 Alcohol is a popular drink of choice for those who want to de-stress and get back into the groove of things. That’s because it’s a great form of anesthesia. It numbs you until you can’t even feel your toes. Drink some more and you’ll start losing sensation in the rest of your body. Hey, you can’t even hold your head up and look decent. You can barely open your eyes, but your friends insist that you join every photo. In their effort to help you, they hold you up and get you camera-ready. What came out was a picture of you with your eyes barely open and drooling like a teething infant. You’re their human puppet. Be careful because you’re now vulnerable to become a victim of just about every prank mentioned on this list.
[/sociallocker] 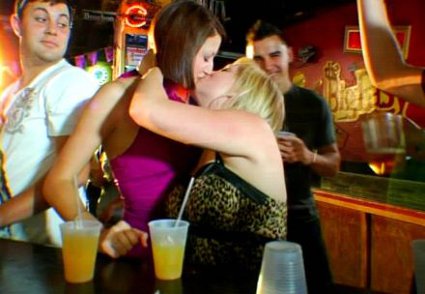 So, you decided to explore your sexual preferences with alcohol as your gut-fuel. Or, you simply knew that guys love to see girls make out. Whatever the case may be, you and your friend are not together. You even barely give each other hugs when you’re sober. Bring booze into the picture and it’s a different scenario altogether. Alcohol just encourages everyone to switch teams. Women, in particular, like to pull off this stunt. What is it about alcohol that allows you to exploit the human being’s latent need for homoeroticism? Whatever the case may be, you’ve just given the men a free show and you’re now faced with another dilemma: that awkward moment where you and your friend have to explain your actions to each other the very next day. Or, it’s just too shameful, give yourselves a week before you even talk about it.

The next time you do get caught in a compromising position, blame alcohol. More importantly, take comfort in the fact that you’re not the only fool in this planet. There are bigger idiots out there. In fact, you’re in good company. The best thing that you can do right now is plan your revenge. Do something that defies the odds and tease your friends mercilessly for their stupidity. Heck! If you can’t beat them, join them. It’s more fun playing the prank than being on the receiving end of one. And if they do get mad, don’t let it get to you. They’ll eventually forgive you for it. After all, didn’t they do the very same thing when you were unconscious? They’re just jealous that couldn’t come up with something that equals your ingeniousness.

What crazy things have you done to your drunken friends?  Let us know in the comments below!