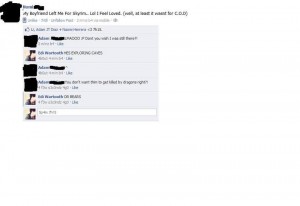 We’ve all heard about girlfriends who bitch and moan because their men don’t mind them due to the latest video game that’s been released. How this is better than him leaving her due to Call of Duty is beyond me. Whether he’s trying to defeat dragons or just running around shooting bad guys, the premise is the same. Any guy choosing fake action to real action is an imbecile. And after everything’s said and done, she really shouldn’t call him a man either. Idiot would probably suffice.