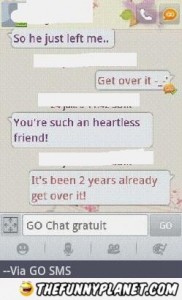 Getting over a bad breakup can feel like climbing Mt. Everest on the hottest freaking summer day. But seriously, if it has been two years already, then what the hell is wrong with her? Either this guy was the greatest boyfriend ever or this chick hasn’t found a dude to rebound with yet. No wonder her friend is sick of her whining. If I were the friend that didn’t get a reprieve from hearing about the boyfriend who left two years ago, heartless wouldn’t be the term she’d use on me. It would probably be “inconsiderate bitch” for all the meanness that I’d be dishing out.