If you’re a girl, then you’ve at least had one heartbreak experience that has left you in a pathetic, blubbering mess. Whether you decided to leave him, he decided to leave you, or it was a mutual thing, there’s always a reason for it, at least most of the time. In most cases, the relationship ends never to be reconciled or to even be friends again. Although most women wallow in their best friends’ arms and with a pint of ice cream, some seek revenge like the vindictive women they are. Here are a few examples of what happened after these women’s boyfriends left them. 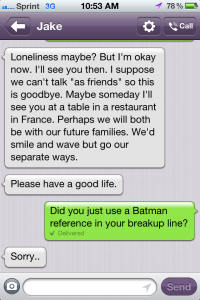 We know Batman is cool, but for this guy to use a line from The Dark Knight Rises to get out of his no longer desirable relationship is really lame. First of all, it’s Alfred’s line to Bruce. Secondly, he should have made up his own bullshit lines to break up with his girlfriend and leave poor Alfred out of it. At least when Alfred said it, there was real depth and true feeling to it. Kudos to this douchebag’s girlfriend for surviving that relationship. If only Nolan wrote the movie sooner, maybe she wouldn’t have had to endure being with him so long in the first place.