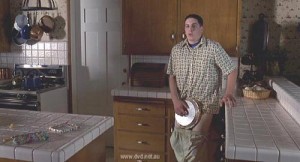 This is probably the most talked about teen movie. It was hilarious and had gained quite a cult following in its time. However, the sequels, needless to say, were just sad. Seeing Jim in a constant fix is just pitiful. The movie is as overplayed as boy bands during the 90s. Nonetheless, no one can argue about how funny the first installment was. He tried to do it with an apple pie since someone told the poor virgin that this was how a woman’s vagina felt like. No one saw apple pie quite the same way for a long time after this.