Needless to say, these famous masturbators are brave. While they don’t exactly show their goods and are still several steps behind actual porn stars, they serve to awaken the imagination. People can now imagine that they know how these famous Hollywood folks pleasure themselves. Whether if it’s for money or if it’s for the Oscar, these actors masturbated for the whole world to see. We may have laughed at them as they made a fool of themselves in front of the camera, but guess who’s laughing all the way to the bank now? Yup, these famous masturbators somewhat deserve our respect. So, let’s all take a moment of our lives to see who merits some credit and our undying deference: 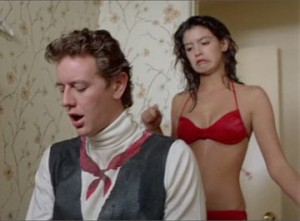 It’s not the act itself that makes the scene memorable. Rather, it’s Phoebe Cates. After this movie, she became every boy’s fantasy. Judge Reinhold whacked off in his pirate costume when he got caught mid-flog. Can you imagine the embarrassment you’ll feel if this happened to you? Well, who can blame him? Here’s a hot lady in a red bikini, obviously aware of her blatant sex appeal. She was aghast at the sight that greeted her in the toilet and Reinhold was stumped. A smart man, on the other hand, would have continued.