What do you do when someone says “Cheers!”?

A big smile comes across your face as you clink your drink glass with all the other lushes in the room.  How incredibly fun.  Maybe you are just a straight shooter from England and you just say “Cheers to you too” right back.   Not quite as fun, but amusing none the less.  But that’s not what we are talking about here.  You may be old enough to remember the hilarious television show from the 1980’s named “Cheers”.  Or, you may be young enough to be trashed at 3 in the morning and catch reruns.

Anyhow, this series is actually all about drinking, womanizing,  and all the crazy antics that happen at a bar. “Cheers” is a bar where the main characters meet, drink, and make sarcastic comments towards one another. It’s almost like an 80’s version of Maclaren’s, the main hangout on How I Met Your Mother.  One of the main characters that you’d honestly fall in love with is Norm Peterson. Norm is one of the hilarious drunks on the show that seems to always have a never ending glass of beer in front of him.  As they say, with wine comes wisdom. In Norm’s case, his wisdom comes from that never ending flow of barley into his system.  Let’s take a look at some of that awesome wisdom you can live your life by: 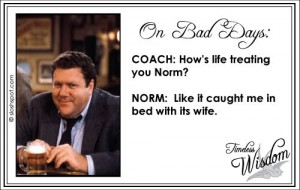 Norm is just saying that life has got you screwed! Like they say, we are all no longer virgins because life has been screwing us since Day One. 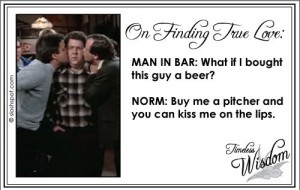 All for the love of beer! You’d do everything and anything for that sweet nectar known as beer. What would you do for free beer?