It’s normal to see a man dressed as an animal. Hey, it’s a common sight every Halloween. Turn that around and you have something worth remembering. Anthropomorphism, or what is otherwise known as the attribution of human characteristics or behavior to an animal or object, has been used by artists for many years now. Some of these animals look downright bored. They just can’t, for the life of them, figure out what’s expected of them.

The only exception here is the monkey with marijuana in his hands. He looks like he’s having a grand time with it. Can you blame him? Give doobie to just about anything that breathes and you can bet that they’ll get hooked on it. 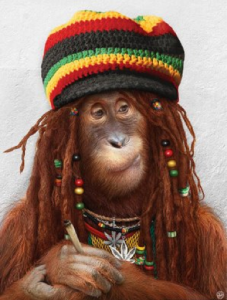 This monkey looks like he’s about to join the Bob Marley movement and become Rastafarian. He’s just realized that this magic white thing can take him to places not even known to man.