Tattoos, when done well, are amazing works of art that can come alive on the skin. Rappers like Eminem, Lloyd Banks and 50 Cent have some pretty cool ink jobs, and obviously, they put good thought into it before they decided to have it permanently etched on their bodies. Some others though, have downright regrettable ones. Either these artists have really bad taste, or they secretly wish they never went under the needle. Thank God cover ups and dermatological choices are available these days, even if it’s at a hefty price. Good thing most of the lucky mofos included in this list make an impressive amount of money via their music careers. Obviously their brain cells weren’t working on the day they got them. Here is a list of rappers with the worst tattoos. 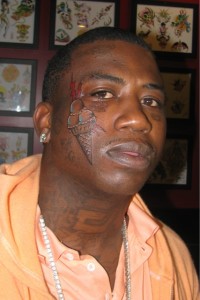 This one definitely takes the cake, or should I say ice cream? Why anyone in their right mind would even consider getting an ice cream cone in the first place, and on the face nonetheless, is obviously… well, not in their right mind. The ice cream cone was bad enough, but to top it off, it has the word “Brrr” written on it and lightning bolts shooting out of the sides. It should have just said “Bad Idea” instead. At least people could still be able to appreciate it for its honesty.