Unless you’ve been living under a rock for the past 50 years, or you’re 12 years old, you must have heard the name Winston Churchill. Some of you might be saying, “Come on, give us a break. He’s not even American”. True that, but he is the first Honorary Citizen of the United States, which must count for something right? Aside from his days as being the only British Prime Minister to receive a Nobel Prize in Literature, Churchill was known for his many wise words. Let’s take a peek into his various motivational quotes below: 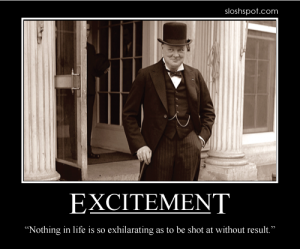 If you consider being at the receiving end of a two-barrel shotgun exciting, then this quote is for you. Whoever said “A life without excitement is not a life well lived” is in agreement with Sir Winston Churchill. Although what you might consider excitement, someone else might find alarming. Ask the poor nitwit who was brave enough to ask your daughter out how he feels having a gun pointed in his face. I’m pretty sure he’ll tell you he prefers not to wet his pants on a first date.