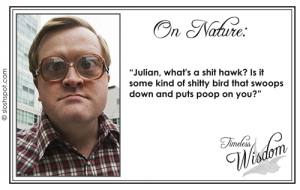 The once wise William Shakespeare wrote “One touch of nature makes the whole world kin.” Apparently so does living in a trailer park. How else would you figure out that your mom’s sister’s husband’s third cousin from his uncle’s side is really your dad? 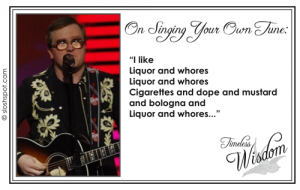 Something can be said for a guy who went on tour with Guns ‘N Roses singing the lyrics to this exact song. Besides, who else wouldn’t consider liquor, whores, cigarettes, dope, mustard and bologna as his ultimate to do list, in that exact order too.

So take it from Bubbles, being labeled as trailer park trash isn’t all that bad. Once you get past the cigarette smoking, prison tattoos and 70’s disco stache, there’s more to behold, like dog tags and sex tapes. At the end of it all though, you just can’t hide the trash. Taken from some wise words written about Paris Hilton. She proves that you don’t actually have to be poor to be white trash.