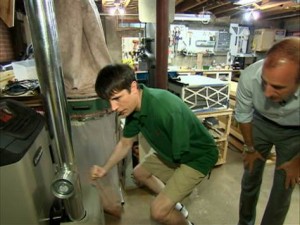 Jonathan Metz got his arm stuck in a furnace for 12 hours. You can only imagine the pain he felt. Well, let’s just say that he did what a normal human being would do. He cut his arm off because he thought this was a much better idea. It was out of sheer desperation that he decided to lose a perfectly good arm. If this were MacGyver, you can bet that he’ll get himself out just by using a paperclip and a pair of pliers.