For people who aren’t quite familiar with the English language, these weird phrases are just downright dumb and senseless. Unfortunately, these are part of modern Americans everyday lingo. Shout out “Boo yeah,” and someone might just tell you that you’re putting two contradictory words together. How can you agree with someone while booing him at the same time? That just doesn’t make any sense. But hey, that’s part of evolution. Still, this would send your English professor cringing and running for the hills.

We’re all for evolution and all, but some of these phrases need to go! Unless you want to sound like an illiterate who has spent his days in the trailer park rather than in school, it’s time to get a lesson on proper language etiquette.

Meaning: An adverb meant to replace anyhow, anyway, or anyways 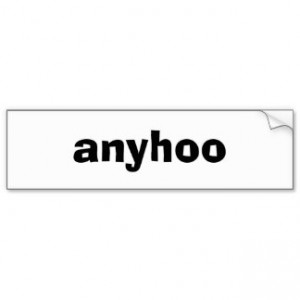 Have you all turned into owls? This word absolutely doesn’t make sense. It’s meant to replace certain adverbs, but why? It’s not as if this word shortens the original word. Those lazy asses can’t even use it as an excuse? The only time this word becomes acceptable is when you’re writing for Dr. Seuss and you’re trying to look for something that rhymes with Moo!