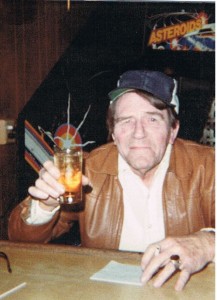 Watch out for this one, ladies. Not only is this guy old enough to be your grandfather, he already probably is! If his half-opened aloha shirt doesn’t turn you off first, then the huge gold chain and medallion around his neck definitely will. How this guy even thinks that he has a plausible chance with you is already astounding. Give the guy some credit though, he must truly believe he’s a keeper.  Either that or he’s got a hell of a lot of Viagra in his pants pocket. And if he ever decides to turn his greedy eyes to you, just let him down lightly. At least no one can accuse you of being mean to the elderly.

So the next time you decide to go out for a night on the town, you may want to think twice. If you’re not up for dealing with Hashtag guy, the Obnoxious Jock or the gross Dirty Old Man, then take a minute to rethink your plans. Maybe that night in your messy apartment, surrounded by your various cats and sole bottle of wine doesn’t seem so bad. At least that’s how you’ll justify it. #sadandlonely