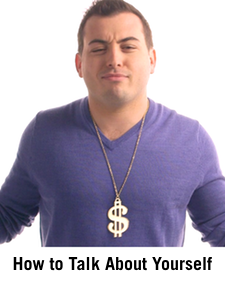 He’s actually bragging, but he just doesn’t want you to realize it. He’s hoping that half of his Facebook friends are idiots. He seemingly plays the humble card, but he’s apparently failing miserably because in between those words are the list of accomplishments that he’s done. However, you do have to give him credit by pretending to be coy. If you dis him, you’ll seem like the unsupportive bastard who doesn’t deserve to be on anyone’s friends list.