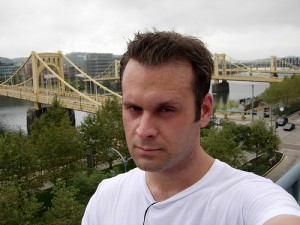 He must’ve been a geek in high school and he actually thinks that he looks so much better right now. He grew out of the awkward phase into the man that he is today. What he doesn’t realize is that he may have outgrown the geek that he was, and now, he’s a full-fledged loser. He’s obviously trying to connect with everyone and hope that nostalgia lands him a hot girl.